It’s that time of year again. Earlier in the week I had received several calls from potential customers looking to have a chimney cap installed. I asked a few questions to determine the type and style of cap they were interested in,  and I also inquired to see if they noticed any sounds coming from the chimney? They stated that they had not heard anything unusual, and with that I was able to get them on the schedule.

When it comes to installing chimney caps on homes this time of year, especially if they currently do not have one, you have to do some “due diligence.” The reason is that this is the prime season for Chimney Swifts to nest and raise their young. If you’ve never had a cap installed there is a good possibility that you have an active nest. Prior to installing a cap you have to determine if in fact, there is, or isn’t a nest in the chimney prior to installing a cap. This has to be done carefully so that if there is a nest, you don’t disturb it, potentially harming the eggs or young. Chimney Swifts are protected under the Federal Migratory Bird Act and it is against the law to disturbs an active nest!

Now back to the aforementioned potential customers. They happened to be scheduled on the same morning and I was “two for two,” with active nests in both chimneys. I informed both customers that we would need to wait till the birds left and were no longer using the nest, and at that time we would be able to cap the chimney. The last thing we want to do is put a cap on and harm the birds. Chimney Swifts are also good for controlling the mosquito and other insect populations, so it is in our best interest to help them along.

While it can be annoying to have Swifts in your chimney this time of year, the reality is, they won’t do any harm to your chimney. They may even help prevent you from getting some bug bites! Given some patience and time, the Swifts will be back on their way to South America and then we can resolve your cap issue. 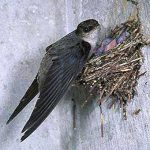